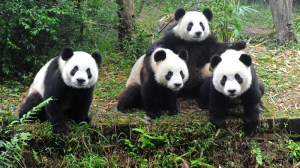 Traffic was backed up the mile walk to the subway system that took us from southeastern Beijing to northwestern Beijing. The Zoo sits between the 2nd and 3rd Ring Roads, the series of beltways that signify status in the city. On the subway and streets my foreignness stood out from the crowd. The only other non-Chinese person I saw was a gangly white man who had a hard time getting out of the way of the subway door when the swarms pushed in. The zoo itself was similar; swarms of people but few westerners. Apparently the tourists stick to the Forbidden City and Tiananmen Square rather than venture into parts less openly hospitable. They are missing out. I’m used to getting stared at, but it’s worth it to see more of “real” Beijing and not just the westernized portions.

The 20 Yuan entrance fee (about $3) included the special panda exhibit, though the aquarium inside the zoo carried a separate fee of 120 Yuan (~$18). As an aquarium nut I was eager to see how this one compared. I was pleasantly surprised to see that it was well done. It featured a huge tank with many sturgeon, the largest stretching up to 10 feet long. The coral reef area was on par with the best aquariums. The jellyfish area – two big rooms with many tanks of red and blue lighting – rivaled that of the Monterey Aquarium in California. Unfortunately, the dolphin and sea lion shows were boring; the worst I’ve ever seen. I was later told that most people in Beijing wouldn’t have seen any other for contrast (I’ve seen dozens), so wouldn’t be as critical as I.

The zoo itself was at best mediocre. While they had some interesting animals they mostly were in old school cages. The star attractions – the pandas – turned out to be rather depression; huddling near doors with bars waiting to get out of the limelight. After a while it was back to the subway station, again swamped with people, to head back for a rest. The next day was set for a long day trip to Xi’an, where the terra cotta warriors awaited our awe.

8 thoughts on “The Beijing Zoo”