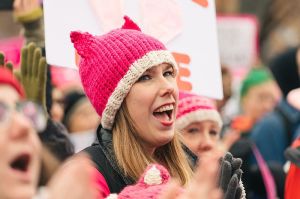 Millions of women swarmed into the nation’s capital and other cities on all seven continents (yes, including Antarctica). They dwarfed the inaugural crowds, as demonstrated by a parade route filled with more secret servicemen in the street than watchers in the stands. Alternative facts aside, no honest person could deny the pink hats signified the beginning of the resistance.

The sea of dissension brought me back to something I had written last October, weeks before the presidential election. Rereading “Waiting at the Free State of America” is disconcerting. I had written:

The initial shock lasted for weeks. I suspect some still haven’t grasped the outcome, even all these years later. But it had happened; there is no doubt about that.

And here we are. A mere days after the inauguration we’ve already seen the devastation ahead of us.

…all that was left in the former USA were the takers, the ones who avoided taxes, scammed their employees, and skimmed off gillions as they ran up debts before strategically bankrupting the country in the hope no one would notice.

Eerily, I had written (again, prior to the election):

After the bankruptcy the Trumpians ran amok, demanding the government feed them. But under the new Putin-puppet all social programs were immediately eliminated. All investment in infrastructure and jobs and education was cut out completely.

The piece presumed it would be years before the devastation would reach the level of the separation of states and formation of a Free State of America. But perhaps the pace of destruction will be more rapid than we imagine. Perhaps it will happen too fast for us to adapt. Perhaps the Orwellian world of Newspeak/alternative-facts, Doublethink, and Thoughtcrime will become accepted as the new surreality of life.

Or perhaps, just perhaps, the pink hats will save us all.

10 thoughts on “The Devastation Has Begun: Can the Pink Hats Save Us?”