It’s funny how simple objects can end up meaning so much in your life. One such object is a brick. Not just any brick; a yellow brick from the burned out remains of a previous life. A life that was changed forever overnight.

Many years ago I was a budding marine biologist. I’ve written a bit about it on Science Traveler and here on Hot White Snow. For several years I managed the aquarium facilities at the National Marine Fisheries Laboratory on Sandy Hook, that spur of sand that sticks out into New York Bight in the area so recently wracked by Hurricane Sandy. The laboratory had been an old army hospital but was converted into a state-of-the-art marine lab complete with 32,000 gallon research tank. The building also contained many smaller aquariums, you know, the size of swimming pools. It was my job to keep those aquariums running, assist with research experiments, and conduct field research on our lab’s various vessels.

One night, the night before I returned from a week-long vacation in another state, the laboratory building burned to the ground.* All that was left was rubble and a pile of old yellow bricks. My work shifted to another building, sans aquatic facilities, until about six months later when the “powers that be” strongly hinted that we “temporary” employees should find other employment. I did, and went from studying the behavior of live marine fish to killing hundreds of tiny fish every day in a commercial aquatic toxicity laboratory.

My colleagues threw me a going away party on my last day as a marine biologist (my career would turn to toxicology and risk assessment from this day forward). I was presented with a gift: 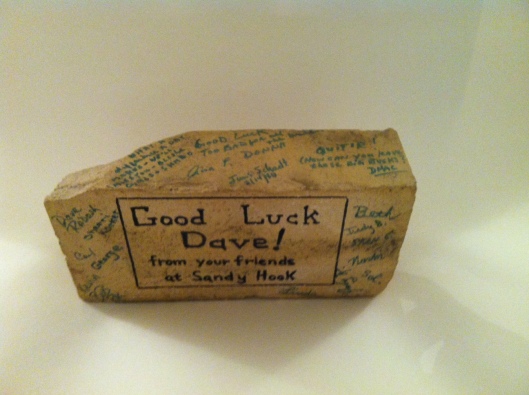 The brick had come from the ruins of the lab. A chip in its corner signified its struggle to survive the flames that consumed my dreams of being the next Jacques Cousteau. But while it symbolized a life gone by, the brick also presaged the promise of my new life. It is signed on all sides by about three dozen of my colleagues. Most are simply signatures, some attempt humor (“Quitir!”), and some are reminders of the power and the character of those whom I had looked up to for my time there. One is signed “We’ll miss you – All the girls and SHMBO.” [= She Who Must Be Obeyed. It’s not as kinky as it sounds.]

On the back one colleague wrote “Don’t discard – May rebuild!” They did rebuild. It took nearly 10 years and was minus my brick, but a new aquatic research lab eventually arose slightly downwind of the original lab (which remains a grassy knoll of memory).

I’ve carefully displayed this brick ever since that fateful night. Last year I visited for the first time in three decades, and while many of the people had retired, a few still remained. One close colleague who started around the same time as me in the Behavior Department has risen to Director of that department. The librarian was still tending library in the new building – with a small glass case containing the few musty and scorched books remaining from the “great fire,” now standing guard over the new stacks and computer monitors that dominate today’s libraries.

It’s just a brick. But it’s also so much more.

[The above is the first of a series of posts under the category of “My Life in 50 Objects.”]

*Note that the burning of the lab was an arson, one of a dozen that had occurred on The Hook. I’ll have more on the arson, and the tragic and familial twist to the discovery and end of a mystery that kept us in panicked suspense for many weeks.

Check out my Goodreads author page. While you’re at it,  “Like” my Facebook author page for more updates!