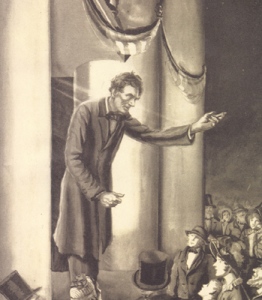 That is the standard I would ask Republicans to use when they decide how to interpret the actions of Donald Trump. What if Obama had done it?

We know that Republicans have a gross double standard. When Obama played golf, Republicans couldn’t stop arguing that he was wasting taxpayer dollars. When Trump plays golf – three times as much and at his own golf courses, charging exorbitant rates to the secret service while there – Republicans argue that it isn’t important. There are hundreds of cases where Obama would be chastised while there is nary a whine from Republicans when Trump breaks the law.

Yes, the world sees it. Seriously, it’s that obvious.

So here we are during impeachment proceedings. Remember that the Republican party impeached President Bill Clinton for lying about having a consensual affair. Remember also that many of the Republicans trying Clinton for lying about the affair were simultaneously themselves lying about having affairs. Like Donald Trump, Speaker Newt Gingrich was having one of a series of affairs. Other Republicans were doing the same; one was later found guilty for molesting young boys. Flash forward to now and Republicans bend over backwards to make excuses for Trump’s multiple well-known affairs and attack the more than 20 women who came forward with accusations of sexual molestation.

As I write this, one of Trump’s hand-picked ambassadors (hand-picked after giving Trump a million dollar donation) is admitting under oath that Trump repeatedly violated the Constitution. A long list of witnesses have testified that Trump did this. This is on top of the hundreds of examples of Trump violating the emoluments clause of the Constitution, blatantly lying in nearly every breath, and viciously and dishonestly attacking dozens – hundreds – of people who have caught Trump in corruption.

What if Obama had done that?

Many Republicans are afraid that they will be “primaried from the right,” that is, forced into a primary by someone even more extreme right wing than themselves. Given where the party stands now, that seems unlikely. Add in the high probability that Trump will be impeached by Christmas and there seems little political downside for Republicans who stand up for honesty and integrity and their oaths of office. [And yes, your commitment to the Constitution is supposed to be stronger than your commitment to a party]

Six years before he was elected president, Abraham Lincoln was faced with his then-Whig party being afraid to stand up for what was right for fear that they might be branded as abolitionists. Lincoln reminded them that standing up for what is right doesn’t mean you have to change your politics. He noted:

I am not a Democrat, but today I will be voting for Democrats in the Virginia state and local elections.

I’ve been open in my disdain for what the Republican party has become. As I noted in a previous post, the Republican party has institutionalized dishonesty. It’s essentially their platform. The party that once was the party of Lincoln is now the party of the KKK, neo-Nazis, and a pathological liar and con man. This isn’t an opinion. This is demonstrated unequivocally by the facts.

That doesn’t mean I agree with everything the Democratic party proposes. I don’t. But the Republican party has been so dishonest for so long that they ensure we can’t even have an honest discussion about anything. Rather than debating different means of reaching solutions, the public has to constantly refute the blatant lies and misrepresentations of the Republican party. Republican Senate Majority Leader Mitch McConnell epitomizes the disdain for the American working public that drives the dishonesty of the Republican party.

The 2016 election told us a lot about ourselves. The three years since then have reinforced that lesson.

But we now have a chance to correct our misconceptions and make amends for our past votes. Today there are critical elections in Virginia, Kentucky, and other states. It’s a chance to set the stage for next year’s presidential and congressional votes by showing other Americans that it’s okay to admit previous errors, to choose what is right this time rather than feel trapped by what in retrospect was wrong last time.

In my recent book on Abraham Lincoln I wrote about his legacy. Lincoln would not be a Republican today, without question. I said:

Today, Lincoln almost universally ranks at the top of any “best president of all time” poll, with both Democrats and Republicans claiming the mantle of Lincoln. Ironically, the Democratic Party has a clearer case. Republicans in his time were for inclusiveness, personal freedom, and positive government action. Lincoln championed federally funded internal improvements to build infrastructure, at one point arguing, “The legitimate object of government, is to do for a community of people, whatever they need to have done, but cannot do, at all, or cannot, so well do, for themselves.”

Today these characteristics are reflected by the Democratic party. Democrats today reflect all Americans – white/black/brown/yellow/red, Christian/Jewish/Muslim, poor/wealthy/middle class/working class, straight/LGBTQ, male/female/non-binary. Republicans reflect largely white, male, evangelical. That’s it. Again, not an opinion; facts shown by the almost universally monochromatic, and largely male, elected officials of the Republican party. Ah, but not just white, male, evangelical – also, the rich. Every policy pushed by the Republican party benefits the rich and gets the poor, the working class, and the middle class to pay for it.

So today I vote for the Democrats. All of them.

Once the Republican party has been purged, perhaps they can return as a viable major party. But it won’t happen until they are gone. Every one of them.

For those Republicans who say, “Wait, not all Republicans are dishonest,” all I have to say is prove it. Refusing to speak out against your own party’s institutionalized dishonesty is being complicit. It is aiding and abetting Anti-Americanism just as much as not reporting a vicious crime you directly witnessed, thus emboldening the criminal to continue to commit the crimes.

So to reiterate what I said in my last post, adapting what Lincoln once said about lawyers:

This is why it is critical to vote Democratic today. Not because you always will support their policies, but because at least the Democratic party believes in all Americans. We can argue about specific policies, but first we need honest politicians to argue with.

I will be voting Democratic across the board today. I urge all voters with elections today to do the same.