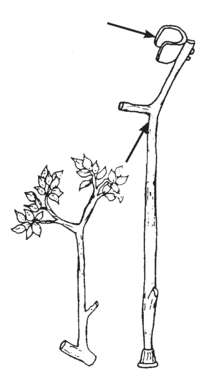 One of the joys of hiking is experiencing the forest and the trees and the mountains and the lakes and the streams. Often on rough terrain we must scamper over fallen branches. But this hike the branches came in handy in another way.

That wasn’t a branch. That was Pablo’s ankle. And that was not good.

The hike had been long and adventurous up to the mountain lakes outside El Chalten in Patagonia. The views were tremendous, the hike tiring but exhilarating, the glaciers immense. We were almost back to where we had left the car nine or ten hours ago. The path at this point was smooth and relatively flat. But one slip and the ankle was snapped like an old branch.

As the night fell and the temperatures plummeted we knew we needed to get him out of there. Hopping with us supporting him went nowhere fast as the uneven ground quickly made that idea unrealistic. The next option was to gather suitable branches to make a splint, which worked well to immobilize the ankle. Branches for makeshift crutches didn’t work so well and in the end one of us ran (carefully) the remaining few kilometers to a hostel near the car.

Three hours later Pablo was being stretchered out of the woods to a waiting ambulance. The branches had done their job keeping the leg from getting worse; now it would take a series of surgeons to put it back together again.