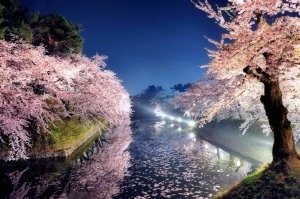 Spring came early this year; spring is coming late this year. The cusp of spring arrived, then departed, then arrived, and again departed; only to arrive once more. Perhaps for good this time.

Officially, of course, spring comes only once a year on its equinox – March 20th in the northern hemisphere (which equates with the autumn equinox in the southern hemisphere). Equinox is the technical term for when the Earth’s equator [all these “equi” words derive from the same roots as “equal”] passes through the center of the Sun. On these days, spring and autumn, the hours of daylight and darkness are about equal.

All this is nice, but in reality we measure “spring” in many ways. Meteorological spring, for example, started on March 1st this year. The first crocuses and daffodils may signal spring where you are, while the annual cherry blossom festival in Washington DC begs us to put on the t-shirts and shorts.

This year spring arrived in February. Temperatures zoomed into the high 70s (Fahrenheit), even toppling over in the 80s a few times. Snow was non-existent. Sun was abundant. Spring had arrived before winter had a chance to strut its stuff. But then mid-March, when the equinox sought to reveal the wonders of spring, winter arrived with a vengeance. Snow, cold, wind. Not very spring-like, I assure you. This pattern of unnaturally warm and exceedingly cold had shown itself several times during the “winter,” but this reordering of months was most noticeable right when we were trying to decide to flip wardrobes. January was clearly March, February was May or June, March was January, April is starting off as March. Hopefully by June we’ll have June.

It is midnight on the cusp of spring.