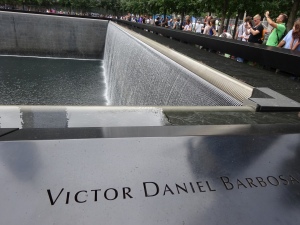 I don’t recall how long I stood there watching her slowly disappear into the distance. For a moment I was back in college and the bittersweet memories of love lost. I almost started to run after her before catching myself.

“She’s married, remember?” I must have said it out loud because an elderly woman looked at me sadly, slowly nodding as she seemed to be scanning back in time to her own lost passions.

Silently, I groped my way toward the uptown “2” train. Maybe I would lose myself in the crowded loneliness of the midnight ball watchers in Times Square. After all, it was New Year’s Eve.

The buzzing in my head woke me up. Wow, I thought, how much did I drink? I don’t think I’ve ever had a hangover that made my head…wait, what day is this?

“What? You’re still here?” She was crying.

“He what? Hold on, catch your breath. He’s in jail? What the hell happened?”

I couldn’t help but think how gorgeous she looked even though her face was red and puffy. Despite the obvious signs of trouble, she had taken the time to put on makeup and dressed to the nines. She nearly leaped into my arms when she saw me, then quickly jumped back at the doorman’s discretely disapproving glance.

It didn’t take long before we settled in Teardrop Park, which seemed appropriate as our silence was interrupted only by her occasional whimper. Finally she opened up, both in words and tears. Something about some sort of SEC investigation and money laundering or…Honestly, most of it went over my head, but clearly her husband was in big trouble and had been detained. She had called his corporate office and they were arranging for their New York attorney to take care of it. Seems she had no idea what his job entailed; he usually just told her to enjoy the advantages of high finance, which usually meant a new pearl necklace or diamond studs and a knowing smile whenever she started asking questions. It seemed sketchy to me but I listened without saying much. I sensed that was what she needed most, someone to listen.

“I’m tired of it,” she told me after going silent again for a long while. “He goes off on long trips and I never know what’s going on. Maybe he has a string of girlfriends in all those cities. Not that it matters; sometimes I feel like I’m just another of his possessions. I really want him to love me, show me passion, show he can’t live without me. You know, all that schmaltzy stuff. Do I sound silly?”

She went on for an hour before suddenly stopping.

“Oh, I’m so sorry, Dave. I’m so embarrassed. Laying out my troubles to you.”

“Now you’re sounding silly, Mare. I could listen to you forever.”

Forever. Somehow that word triggered all those memories of times gone by.

“Um, we, um, we better go. Are you sure there’s nothing more you can do to help your husband?”

She tells me it’s being handled, so we drifted off, leaving reality behind in its silence.

Only later did we realize this was just the beginning…