In my second of my series on 50 Objects, it’s time to take a look at a bust whose eyes oversee my every writing minute. The eyes are those of Abraham Lincoln. 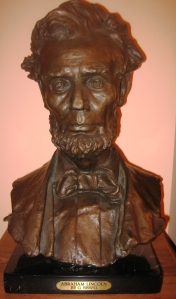 While I’ve been a scientist my entire professional career, I’ve also been devoutly interested in Abraham Lincoln. I collect books about Lincoln – more than 1200 so far – and read voraciously to better understand the man who stood above his peers despite a humble upbringing. I’m currently a Vice President in the Lincoln Group of DC, which gives me access to many Lincoln scholars, authors, and experiences. And, of course, I’m writing a book on Abraham Lincoln.

The bust is big, standing about 20 inches tall and a foot wide, not counting the base. Made of bronze, it weights over 35 pounds. It sits on a wooden file cabinet to the left of my home office desk, watching over me as I ploy my new trade. In times of indecision or confusion I sit back in my chair and commune with Old Abe. He doesn’t answer, at least not verbally, but I admit that occasionally I think I see the path forward in his eyes.

He hasn’t always sat where he is now. In the dozen or so years I’ve had him he’s lived in three houses. He took a slow boat to Europe in a cargo container when I moved to Brussels for three years, then an even slower boat back to a different house upon my return. He’s gotten through the moves stoically, not once batting an eyelash for all the miles he’s traveled. In fact, he seems to enjoy it. 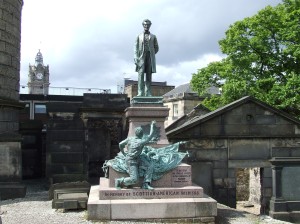 Ironically, I just missed its original inspiration. I had lived in Edinburgh, Scotland for a brief three months, during which time the Lincoln bust remained home in the states. The bust is by a sculptor named George Edwin Bissell, and it’s modeled after Bissell’s life-sized Abraham Lincoln statue called Scottish-American Soldier’s Monument located in Old Calton Burial Ground in, you guessed it, Edinburgh, Scotland. The monument is the only U.S. Civil War monument located outside the United States. And I missed it. While I worked in Edinburgh for that summer I was unaware of the statue. I’m kind of bummed about that, but then it does give me a great excuse for getting back there, something I’ve been thinking about doing for some time.

The bust, and Abraham Lincoln, has been a part of me for a very long time. I expect that trend to continue even longer.

[The above is the second of a series of posts under the category of “My Life in 50 Objects.”]