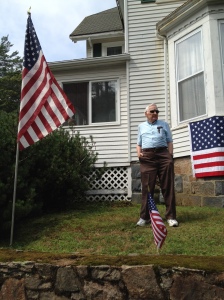 A few weeks ago I wrote about my Dad’s Stories, in particular his favorite story of time in France and Germany at the end of World War II. After about 9 days here I drove them back to the airport for their trip home this morning. We had a great visit.

Along with catching up on stories we went to see A Christmas Carol at Ford’s Theatre, which was an amazing experience. I’m not sure what I expected but it beat my expectations by a wide margin. The performers were excellent, the special effects and sets spectacular, and the audience appreciative. The fact that we had an equally good view of the stage and the Presidential box where Lincoln was assassinated made it all the more memorable. All of us were genuinely impressed.

We also had Thanksgiving dinner at my brother’s house, complete with a tastily prepared turkey and delicious homemade apple pie. On Sunday night we all went out to dinner at a local restaurant in an attempt to get away from the seemingly unlimited supply of leftover turkey and stuffing.

Because we had considerable time catching up I got to hear more of Dad’s stories. Perhaps it would be more accurate to say I heard Dad’s single favorite story more times. Any mention of our recent travels generally elicited another recitation of the World War II story. While looking at the photo book I had made a while back about my time in Europe, Dad would see the photos of various small towns in Germany and it would trigger his memories. Not long after putting it down he would pick it up again as if seeing it for the first time and repeat what he had just said. This is a new thing for me. At 88+ he’s been remarkably coherent and active (as has my Mom at 83+), but this time he seemed to have brief periods of disconnect, where lucidity escaped momentarily. His physical stamina has never quite returned since his open heart surgery (and the complications he experienced), but up until lately his mind has always been sharp. Perhaps this is an artifact of the strain of airline travel for someone his age, or perhaps the signs of something more permanent. Time will tell.

In any case we had a grand time and I’m looking forward to our next visit together.